Do you remember the world-wide phenomenon and phone app Pokémon Go?  It felt like all children and adults alike were spending the entire day walking around with their phones to catch Pokémon.  Although the craze subsided, this app was one of the most widely known and utilized examples of augmented reality.  Augmented reality is computer-generated technology that adds to the reality you see.  In Pokémon Go, augmented reality is the visible Pokémon in your actual environment.  Augmented reality is different from virtual reality, which is a completely computer-generated environment.  Phones and tablets work well with augmented reality technology.  Another example of AR that users may be familiar with is Vito Technology’s Star Walk app.  This app enables users to point their phone camera to the sky and see the names of stars and planets reflected onto the image they see.  Although AR may seem like a thing of the future, it is here right now and consumers have already shown their enthusiasm for it!

Today, more and more marketers are realizing that augmented reality is no longer reserved for tech companies and video games—it can be an incredibly engaging marketing tool as well.  In print, there are a number of exciting ways that marketers can deploy AR to create a higher than average engagement rate.  Take a direct mail package, for example.  How exciting would it be to receive a postcard that you could actually interact with—virtually?  Augmented reality allows companies to incorporate a barcode onto their print piece which can be scanned by the consumer and then interacted with through their phone.  A good example would be a home décor company sending out a postcard advertising a new desk lamp.  With augmented reality, consumers could scan the postcard barcode and then see the desk lamp in their office, viewed through their phone.  Project Color, a recently released app by Home Depot, shows users what a paint color would look like on their own walls.  This encourages the consumer to visualize and interact with the item in their own environment, which can lead to more purchases.  The possibilities are endless!

A major advantage of augmented reality is the amount of time and money it can save companies, especially those in industrial manufacturing.  Imagine how much money and physical labor it costs Lockheed Martin to store and ship its large planes for trade shows.  With augmented reality, all of these costs are eliminated.  Instead, consumers can scan a barcode at a tradeshow and see a life-sized plane right in front of them, including virtual information about it.  In retail, this technology generates fewer item returns because customers are able to see the products in more detail before they actually make the purchase.  This is particularly useful in the age of online retail when less people are seeing physical items in stores and more are ordering online.  According to a study by Ventana Research, the three most important AR capabilities for consumers are getting detailed product information, reading product information, and accessing product information easily on mobile devices.  Simply, augmented reality is an efficient way to market products while also increasing uniqueness and consumer engagement, not to mention its increasing importance during the pandemic.

The beauty of augmented reality is its versatility and ease of incorporation into existing marketing strategies.  Although competitive disruptions are bound to intensify across industries with the increasing popularity of AR technology, it remains a smart investment that can generate higher ROI.  Costs incurred by the implementation of AR technology are easily offset with the accompanying decrease in costs such as shipping and travel expenses and other supply chain costs.  Additionally, AR can have a larger reach than traditional marketing touch points because of its virtual nature.

We’ve seen many great augmented reality marketing campaigns—and I highly recommend if happen upon one to experience it yourself.  One of my favorites is from Absolut Vodka.  The company placed neck ring tags around each bottle and when scanned the consumer could view and interact with a tour of the Swedish village that distills the vodka.  Not only does this endear the consumer to the brand or product, it works to make the consumer feel connected to its history and story as well.  Another great campaign came from The New Yorker Magazine in 2016.  Illustrator Christoph Neimann designed the cover and brought it to life with the magic of augmented reality.  When readers scanned the cover, it became three-dimensional and animated right before their eyes.  Augmented reality is truly capable of turning a simple print campaign into a living work of art.

The importance of augmented reality in various industries, especially marketing, will continue to grow exponentially as consumers increasingly value convenience and rely on the online market for making purchases.  Augmented reality fits seamlessly into traditional marketing techniques while presenting the opportunity to advance them to a highly interactive level.  Backed by our creative agency Digital Shuffle, CCG frequently works with AR technology to enhance any print project.  Let us know your needs, and we will bring our capabilities! 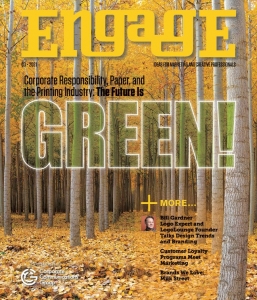 How Grand Format Print is Changing the World Around Us